Cannabis concentrates like BHO are taking the world by storm. But with all the hype around extracts like shatter, crumble, and budder, many people forget about hashish, one of the oldest cannabis concentrates on the planet. Keep reading for an in-depth look at the many different types of hash from around the globe.

THE ORIGINS OF HASHISH

It wasn’t until the 18th century that hash made its way to Europe. After which it became a popular substance among the literary and artistic elite. Today, hash still stands strong as a favourite way to consume cannabis. Largely due to its unique flavour, consistency, and effects.

DIFFERENT TYPES OF HASH FROM AROUND THE GLOBE

While most forms of hash share more similarities than differences, each provides a unique experience distinct from the others. Let’s explore the different types of hash you can find in various countries… Cannabis indica is native to Afghanistan and grows wildly all around the country. The Afghan people have been cultivating and using cannabis for centuries. But the hashish trade in Afghanistan really took off in the 1960s and 70s when the Hippie Trail brought an influx of young tourists to the region. Today, Afghanistan is the largest producer of hashish in the world.

Good-quality Afghani will come stamped with the seal of the producer and is notoriously potent. It is also distinctly spicy and very harsh on the throat. It produces a strong, almost narcotic stone that’ll leave you glued to the couch for hours. A unique type of hash originating from India. Cannabis grows wildly throughout many parts of India, Pakistan, and the Himalayas and has a rich history in these areas. It’s been used medicinally, industrially, and spiritually for thousands of years.

Charas is different from other types of hash because it is made using live cannabis. To make charas, live buds are rolled between the palms of the hands. Over time, the resin from the flowers forms a thick, brown layer on the palms and fingers, which is collected and rolled into balls.

The result is a soft, creamy hash that’s very dark on the outside and a lighter brown or green colour on the inside. Charas also has a distinctive aroma and flavour that is very, very spicy. It is quite potent and tends to produce an intense body stone characterised by deep, physical relaxation. Kashmir makes up the northernmost region of the Indian subcontinent and is renowned for its hash and opium. While there’s little information about Kashmiri hash, its production is believed to be similar to that of charas. However, it is much more aromatic, spicier, and makes for a slightly harsher smoke. It is also more potent and tends to produce a strong physical stone. Lebanon has a rich history with hashish. Today, the country produces massive amounts of hash, with annual exports estimated to be worth over $200 million. In fact, international consulting firm McKinsey and Co. recommended the Lebanese government legalize cannabis as a way to expand the local economy.

Lebanon produces most of its cannabis in the Bekaa Valley. The result is thick slabs of brittle hash with a yellow or red colour (sold as yellow or red Lebanese, respectively).

Lebanese hash has a very spicy aroma, is very potent, and typically makes for a harsh smoke. Growing and processing cannabis is one of the main sources of income for the 1,500 residents of the village of Kullu, Manali.

Manali Cream is made like charas. The result is a black hash that’s soft when fresh and hardens over time. Its flavours and aromas are very reminiscent of fresh cannabis buds. Like charas, this is a mild hash that makes for a delicious and smooth smoke, without the spice you’d find in Afghani or Lebanese varieties. 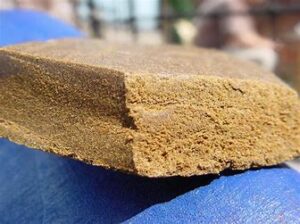 In the 18th century, the northern region of Rif set itself apart as one of the major cannabis-producing areas in the country.

Moroccan brick hash tends to be hard and brittle, resembling chocolate. Moroccan pollen hash, on the other hand, is much softer, similar to marzipan.

Good-quality Moroccan hash will be very aromatic and smooth, without the spicy aromas and flavours that characterise hash from other countries. Moroccan hash tends to produce a nice, uplifting high and contains rather mild concentrations of THC. Like India, Afghanistan, and other parts of the region, cannabis grows naturally here, and the plant has long played an important role in local culture.

Nepalese hash is sticky and creamy with a pungent, spicy aroma. It makes for a very smooth smoke when compared to Afghan hash and boasts a big, bold flavour. Nepalese Hash is very potent and produces a strong body stone. Like Manali Cream, Nepalese temple hash is a delicacy at Amsterdam coffeeshops. Hashish has long been part of Pakistan’s culture, and the quality of Pakistani hash can be very good.

In Northern Pakistan, locals refer to top-grade hash as Awal Namber Garda (“top-grade dust”). The process for making Pakistani hash is very similar to that used in Afghanistan. Some locals, however, age their hash for at least three months inside goatskin or sheepskin to enhance the flavour and potency of the final product.

Pakistani hash is black, has a very spicy aroma, and is notoriously harsh on the throat. It produces a very strong, long-lasting, narcotic stone that’ll leave you glued to the couch for hours on end.