Original post by Ed Rosenthal…The Guru Of Ganga with story written by Gracie Malley. Followed by an article written the master Hashishin himself, Frenchy Cannoli

It is with incredible sadness that I learned of the passing of Frenchy Cannoli. The global cannabis community has lost a leader and guiding light.

You rarely meet someone who is passionate and has the tenacity to make his dream a reality. Even rarer are the ones that share their passion with the world. Frenchy was exactly that man. His legacy will shine brightly.

I enjoyed working with Frenchy and was impressed with his energy and free-thinking spirit. The Master Hashishin increased our knowledge considerably. He rediscovered the Lost Art of the Hashishin and brought it to the modern world. We owe him a massive debt of gratitude. Many hash pipes will be smoked in Frenchy’s memory.

Frenchy was often called a “legendary hashishin,” but his open-source method of sharing information is where his legacy lives on. He was endlessly learning more. Gaining knowledge from all those he met along the way. He shared his wisdom with me for one of my books and I wanted to share it with you.

Reading his words, you can feel the love he had for the cannabis plant and the ancient art of making hash. Frenchy always gave all the credit to the farmers who produced his flowers. Cannolis made by Frenchy – photos by Gracie Malley

The Lost Art Of Temple Balls:

Charas, or hand-rolled resin, is the original concentrate. Alluring and aromatic, charas was born from the first contact between humanity and the cannabis plant. This sticky THC-rich substance is unavoidable when handling marijuana.

Innovations in cannabis concentrates, utilizing newer methods of extraction such as BHO and C02, will soon transform the face of modern-day cannabis medicine. Still, the act of gently rubbing cannabis flowers will remain the easiest and most effective method of collecting fresh resin from wild plants at the peak of their life cycle.

Creations like the Temple Ball will continue to elevate what could be construed as a mere collection into an artisanal craft. The process of collecting live resin in the palm of one’s hands is simple in its methodology, yet challenging in its implementation. While no longer widely practiced, this method remains the sole cannabis resin collecting methodology in tropical countries like Bhutan, Nepal, and Northern India.

To collect resin, first take the fan leaves off the plant.

Next, gently caress the flowers between your palms using a light back-and-forth rubbing motion.

Thoroughly clean your hands of any leaf material after each flower.

Start again until a layer of resin builds up on your palms and fingers.

Then snap the substance off your hands and voila! You have created hand-pressed resin.

The feeling of the resin slowly collecting, plant after plant, is a unique tactile communion. An unbelievable olfactory experience.

There is an indescribable intimacy and closeness that is born from such a synergy. A communion that goes beyond the plant and connects to the terroir that gave birth to the magic. But the relation between a master gatherer and the resin also extends beyond the realm of collecting.

In tropical countries preservation and aging are essential to quality and longevity. To this end, a Royal Nepalese Temple Ball was the ultimate manifestation of resin optimization and preservation.

The origins of such a cutting-edge approach to packaging and long-term conservation may never be discovered, but the art should not be lost. 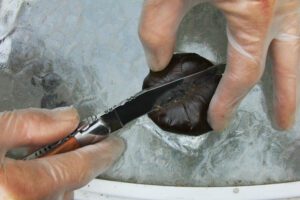 Frenchy cutting on of his creations

The Royal Nepalese Temple Balls were stuff of mythology already in the late ’70s and early ’80s. A fairytale for many. The Holy Grail of concentrates for a few.

Imagine a sphere of resin hand pressed to an absolutely unflawed dark and hard surface polished to a mirror-like quality.

A ball that resembles more of a glossy stone or black marble rather than resin. Picture an outside protective layer of resin fused into a crust so perfect that it can stand the test of time. Visualize cracking open a 10-year-old resin ball like you would break a big egg, the center revealing itself slowly in all its glorious creaminess. Envision a spicy tropical hashish cocktail with subtle earthy undertones taking over your olfactory senses. The resin breaks apart reluctantly exposing its dark red melted caviar-like texture. The long contained aromas bursting out with an explosive force.

Imagine creating such a wonder! One thought on “The Lost Art of the Temple Balls: by Frenchy Cannoli”