The way that magic mushrooms are spoken about in some circles, you could be forgiven for thinking that the term refers to just one specific psychedelic mushroom species. In reality, the world of psychedelic fungi is considerably more diverse than most people might realize.

Current estimates put the number of different psychedelic mushrooms at over 180 unique species .

The most predominant to the genus are…

These mushrooms naturally produce amounts of the tryptamine alkaloids psilocybin and psilocin. This can elicit powerful subjective psychedelic experiences in humans if ingested in high amounts.

These psychedelic mushroom species can be found worldwide. Different species have been used by indigenous groups around the globe for cultural and medicinal purposes for centuries. The Aztecs, for example, used a substance called teonanácatl (“flesh of the gods”), which is understood to have been a psychedelic mushroom. Cave paintings at Tassili n’Ajjer in Algeria suggest that indigenous north African groups may have been using magic mushrooms as early as 9,000 years ago.

Each unique psychedelic plant species differs. They differ in terms of its geographic prevalence and its ideal growth conditions. As well as its subjective psychotropic effects. Below is a look at five of the most well-known and prevalent psychedelic mushroom species around the world.

Mycologist Paul Stamets wrote in his 1996 book Psilocybin Mushrooms of the World that P. cubensis “gets a rating of ‘moderately potent’.” Other research indicates that P. cubensis contains approximately 0.63 percent psilocybin and 0.6 percent psilocin. In contrast, Penis Envy, a particularly potent (and brazenly named) strain of P. cubensis, is thought to contain up to 50 percent more psilocybin and psilocin than its wild predecessor. The Penis Envy strain has extremely thick stems and underdeveloped caps as compared to less modified P. cubensis strains.

It is impossible to neatly sum up the type of psychedelic experiences that come with using these mushrooms. Most of the scientific research relating to psychedelic mushrooms tends to use synthetic psilocybin. Psilopedia, an online encyclopedia of psychedelic mushroom strains, reports that the Penis Envy strain tends to be associated with feelings of intense euphoria. Strains such as Golden Teacher and Hultua, are reportedly well-known for their ability to induce spiritual or mystical experiences. 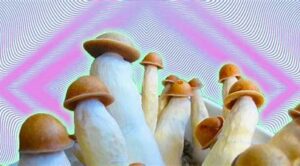 Earlier this year, Medicinal Genomics published a highly contiguous reference genome for the mushroom, which the team hopes will inform more research into the genes of interest and pathways responsible for producing psilocybin. 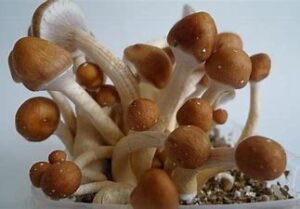 Psilocybe azurescens is generally regarded as the most potent wild mushroom that has been discovered to date, containing on average around 1.8 percent psilocybin and 0.4 percent psilocin. P. azurescens also contains significant amounts of another tryptamine alkaloid, baeocystin, which is an analog of psilocybin. 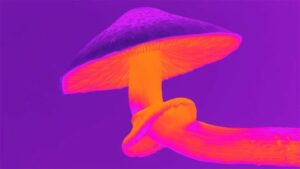 The Azurescens name refers to the blue bruising that develops on the mushrooms’ stalk when handled.

As the story goes, P. azurescens was first discovered in 1979 by a group of boy scouts on a camping trip in Oregon, although they were not counted as an official species until the late 1990s when Paul Stamets published his findings on the mushroom. But it is arguably remarkable that these mushrooms were discovered at all; unlike the other mushroom species that grow over multiple countries and continents, the P. azurescens species is highly localized to the coastal dune grasses in Oregon and Washington state.

There are some reports of P. azurescens users experiencing temporary paralysis when using high doses of the mushroom. However, this high potency has also made these mushrooms a popular option among those looking to practice microdosing.

The earliest reliable report of P. semilanceata intoxication dates back to 1799, in which a doctor in the London Medical and Physical Journal describes the effects of a man serving P. semilanceata to his family for breakfast, after having found the mushrooms in London’s Green Park. One of the children was “attacked with fits of immoderate laughter, vertigo, and a great degree of stupor.”

The species name semilanceata derives from a Latin term meaning spear-shaped, though this species is also sometimes called the “Liberty Cap” mushroom in reference to the distinctive shape of the Phrygian liberty caps worn by groups in ancient Turkey and eastern Europe.

The P. semilanceata is the third-most potent of the common Psilocybe mushroom species, after P. azurescens and P. bohemica, with around one percent psilocybin content.  It is prevalent within Brazil, Argentina, South Africa, and New Zealand.

It can also bear a resemblance to the poisonous Conocybe filaris species (also sometimes known as ​​Pholiotina rugosa). Like P. semilanceata, C. filaris naturally grows across North America, Europe, and parts of Asia. C. filaris is a very poisonous mushroom that contains the same mycotoxins as the infamous Death Cap mushrooms. Consuming C. filaris can be fatal. 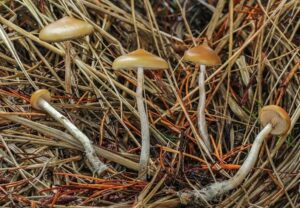 Psilocybe cyanescens is the last of the four most predominant Psilocybe strains. It owes its prevalence in part to increasing human urbanization. It grows readily on humus soil enriched with materials such as twigs, chopped wood, and sawdust. From its roots in the Pacific Northwest and central Europe, the strain has used the lumber and mulch production industries to increase its spread around the globe. 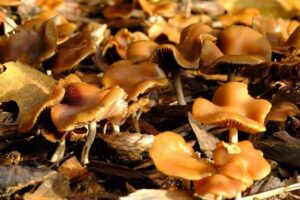 G. marginata, aka the “Funeral Bell”

Although P. cyanescens has a reasonably high potency of the psychedelia-inducing tryptamine alkaloids, it is generally not cultivated by mushroom enthusiasts to the same extent as the other common Psilocybe species as it can be challenging to grow indoors. Similar to P. azurescens, there are also anecdotal reports of P. cyanescens inducing a temporary paralysis when consumed in high enough amounts.

Copelandia (Panaeolus) cyanescens is one of the most notable non-Psilocybe species of psychedelic mushroom, though a confusing naming convention means that it can often be confused with the Psilocybe cubensis strain Blue Meanies – C. cyanescens mushrooms are also commonly nicknamed Blue Meanies due to the blue and blue-green colored bruising that can easily develop on their stems and caps when handled.

In Samoa, the caps of C. cyanescens mushrooms are boiled to form a black juice which is mixed into coffee and drunk. This brew produces feelings of euphoria. With visual and auditory hallucinations that can last for many hours. Cyanescens is most well-known for its potency. 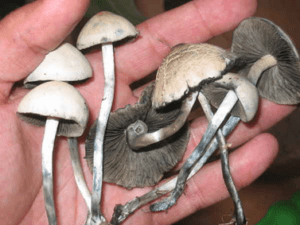 Alexander Beadle has been working as a freelance science writer since 2017. He has covered the cannabis industry for Analytical Cannabis since 2018. He has also written for our sister publication, Technology Networks, and the cannabis industry consultant firm Prohibition Partners. Alexander holds an Masters Degree in materials chemistry from the University of St Andrews.

See you next time… 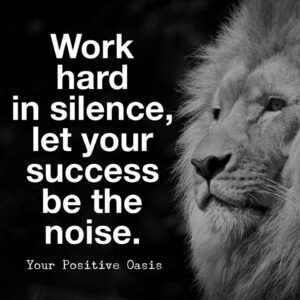